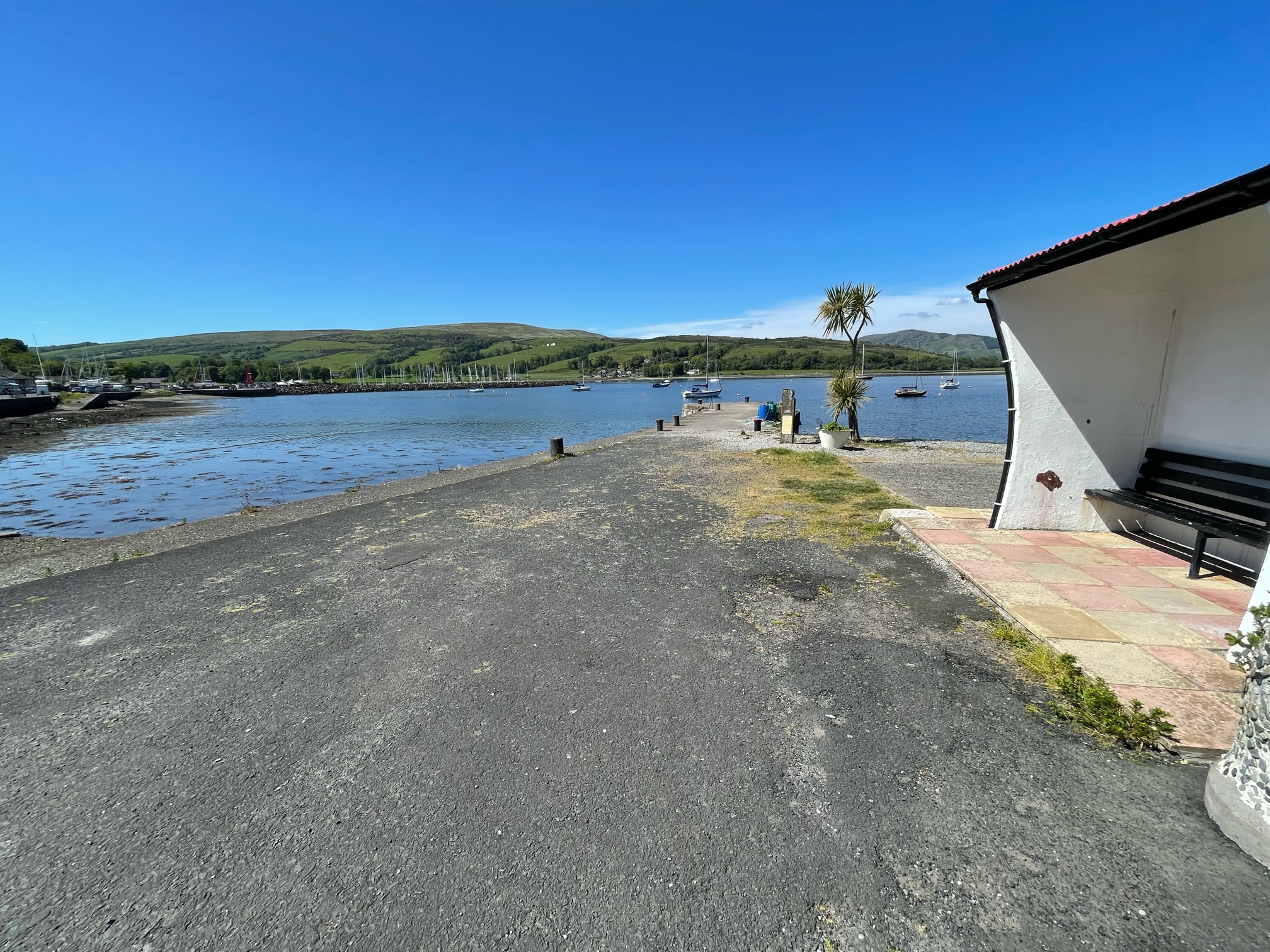 The community owned Anchor Tavern & Hub in Port Bannatyne, Bute,  is on schedule for opening on 13 April at 3pm following several months of frenetic effort by the Port Bannatyne Development Trust (PBDT) and numerous volunteers. It is thought to be the first community owned pub on a Scottish island.

The bar and community hub have seen extensive refurbishment and been repainted with the help of the local community. New beer lines, Wi-Fi and other equipment are now installed, with the cellar equipment due to be connected up today (Friday).  The pub has taken delivery of beers and cask ale and is stocking a wide range of spirits and malts plus ‘grown up’ non alcoholic gins and soft drinks.

£150,000 from the National Lottery funded Scottish Land Fund, enabled PBDT to buy The Anchor and Hub and appoint an experienced business development officer, Calvin Mcfarlane, on a one-year contract. A full time bar manager, Margaret Breeze, is also in place and she is being supported by a team of part time staff and volunteers, who are currently undergoing training. PBDT also raised over £105,000 from a community share offer and crowdfunder, which will finance further improvements. Community Shares Scotland, The Plunkett Foundation and Highlands & Islands Enterprise also supported the project.

In February, Argyll and Bute Council Planning Department gave the go ahead for proposed improvements to store rooms at the rear of the building. However, PBDT has decided to open the pub in time for the holiday season and is delaying the major building works until the quieter months of October or November. The flexible hub space at No34 Marine Road will provide a useful venue for a wide range of community activities.

“We are delighted to be on track for our Easter opening”, says PBDT Chair, Garry Charnock. “This has only been possible with the tremendous help of our committee and many volunteers who have put in hours of time to make The Anchor Tavern look fabulous again. We are now planning to have live music and run a regular pub quiz and other events. We’ve also been delighted by the number of folk asking to use our hub space for a range of community activities.”

Port Bannatyne residents will launch a community share offer next week, in what will be the last piece of the jigsaw that allows the village to complete the purchase of the Anchor Tavern and the former off-licence at 34 Marine Road which will become a flexible community hub space.

An information drop-in will be held in the Port Hall on Tuesday 16 November between 6 - 9pm.

Residents and supporters will be invited to buy shares in Port Bannatyne Development Trust, the Community Benefit Society (CBS) that will own the Anchor. The Scottish Land Fund announced last month that they would provide the funds to purchase the building, subject to a successful community share offer to raise funds to cover renovations and working capital. The shareholders will then control the CBS, on a one member one vote basis. The CBS’s rules have been designed to comply with Scottish Land Fund requirements, which include a majority of shareholders being resident in the village and a £25 minimum shareholding.

The majority of the funds raised will be spent on refurbishment. In particular the parts of the building which customers don’t normally see are in urgent need of attention, with vegetation now growing inside the building. The share offer aims to raise between £50K and £105K, with the extent of the renovations carried out dependent on the total raised, and priorities to be decided by the new CBS.

Jon Sear, Vice-chair of Port Bannatyne Development Trust said “We know £105,000 is a lot of money to try to raise for a small village like Port Bannatyne, but we are encouraged by the success of other communities, in particular Knoydart, whose pub Share Offer just raised twice this amount and had to be closed early, despite their smaller population.

The society aims to pay investors 2% interest after year three and is applying to register for HMRC’s Social Investment Tax Relief scheme which offers attractive tax incentives for larger investors.

A pub in Port Bannatyne on the Isle of Bute is set to be bought by the local community following an award from the Scottish Land Fund.

Port Bannatyne Development Trust has received £150,190 in order to take over ownership of the The Anchor Tavern, the last remaining village pub in order to keep it operating as a social space for locals and visitors

Garry Charnock, Chair, Port Bannatyne Development Trust, said: “We are thrilled that SLF is backing our community’s efforts to develop a welcoming pub and hub in Port Bannatyne on the Isle of Bute. We have a tremendous group of volunteers that managed to put our bid together during the pandemic, and we were delighted with the support and efficiency of the Scottish Land Fund.”

Minister for Environment, Bodiversity and Land Reform, Mairi McAllan, said: “As we go into Community Land Week 2021 I’m delighted to see these awards being made. I know how hard people will have worked to develop their projects and get to this stage. I look forward to seeing what they can achieve. They follow in the footsteps of an ever-increasing number of communities who have taken ownership of vital local assets with support from the Scottish Land Fund, and who are now reaping the benefits.

Cara Gillespie, Scottish Land Fund Committee Chair said: “It is a privilege and a pleasure to be involved in empowering our communities to take control of their destiny through ownership of local land and buildings. These projects will enable so much more than the activities that will take place in the physical assets- they will support local economies and strengthen the resilience of their communities.”

Sandra Holmes, Head of Community Assets at HIE, said: “Communities in the region have been driving forward plans to support and enhance their local areas in what has been a challenging year. These diverse projects are all fantastic examples of people taking control of local resources for the long-term benefit of communities. Ownership will give them greater control over important assets that will reap rewards for people now and for generations to come. We wish all the successful groups the very best in their new ventures.”

In December 2020, a group of local residents got together to create the Port Bannatyne Development Trust as they felt that due to the closure or redevelopment of the local pubs post-COVID-19 there will be fewer evening meeting places for the community. The Steering group was officially formed on 16th January 2021.

The Trust is looking to purchase a vacant building and create a community hub and community licensed bar with spaces for daytime workshops, learning centres, meeting areas, training facilities, a community café, facilities for both older and young people and much, much more, potentially bringing employment to the Port.

Grants are available to partially cover the cost of buying a building. To this end, the Scottish Land Fund has been approached and the Trust has been appointed an advisor from Highlands and Islands Enterprise. To proceed, the Trust has to demonstrate public support for such a project.

The thoughts, ideas and needs of the community and visitors to the Port are therefore vital which is why a survey has been created and which will be carefully analysed and assessed.

The survey and further information can be accessed here:

Paper copies of the survey are available at Port Bannatyne Post Office, Ardbeg Mini-market and the Village Hall Notice Boards. The trust will continue to keep everybody informed especially when the feedback from the survey has been evaluated.